The Great Soviet Encyclopedia (GSE) (Russian:Большая советская энциклопедия, or БСЭBolshaya sovetskaya entsiklopediya) is one of the largest Russian-language encyclopedias.[1]published by the Soviet state from 1926 to 1990, and again since 2002 by Russia (under the name Bolshaya Rossiyskaya entsiklopediyaor Great Russian Encyclopedia). The GSE claimed to be the first Marxist-Leninist general-purpose encyclopedia
The third edition was translated and published into English in 31 volumes between 1974 and 1983 byMacmillan Publishers. Each volume was translated separately, requiring use of the index found at the front of each volume to locate specific items; knowledge of Russian can be helpful to find the right volume the first time. Not all entries were translated into English; these are indicated in the index. Articles from the English edition are made available online byTheFreeDictionary.com 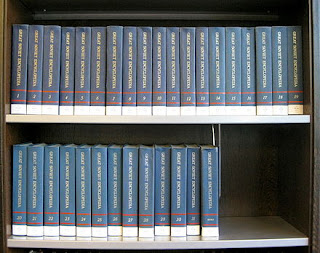 For example, ANTON CHEKHOV
The following article is from The Great Soviet Encyclopedia (1979). It might be outdated or ideologically biased